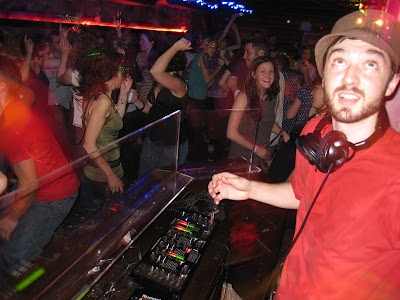 The original song is El Botellón by Grupo Naidy from the album ¡Arriba Sueña Marimba!
They play currulao music, which is native to Buenaventura, and is considered one of the most African of the Afro Colombian genres. Also their interpretations are very authentic and traditional. The band is based in Cali now.

The marimba is a vivid legacy of African presence in Latin America, but only on the Pacific coast of southern Colombia and northern Ecaudor does it keep its close connections to a strongly African culture. Hailing from small towns along the river-ridden Colombian coast, the seasoned women singers of Grupo Naidy raise their voices to the accompaniment of marimba and drums, performing their unique styles of music known collectively as currulao.

After years of work as a film and theatre composer that brought him from new york to europe and asia, Andy Gillis’ passion for all the different musical styles of the world finally overcame him, and turned him into a DJ. It was bound to happen. Now he is producing melodic and bass heavy electronic compositions for the dancehall with the rhythms of both traditional and newly emerging genres especially from Africa and Latin America. As a DJ he plays an international mix of modern party music, including his own remixes, tropical electro cumbias, club music from Brasil, the UK, Africa and beyond and plays a weekly gypsy party every saturday at Mehanata Bulgarian Bar on the lower east side of manhattan.

Uproot Andy will be playing a DJ showcase this summer that will focus mostly on modern Cumbia and will feature Toy Selectah (from Mexico) and Villa Diamante and other Zizek DJs (from Argentina). Its July 10th at SOBs in New York, and its part of the LAMC. (Latin Alternative Music Conference)

Thanks to Andy for sharing his remix with us!