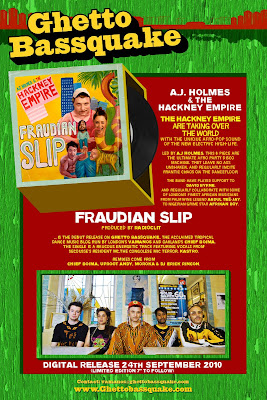 I love the guys at Ghetto Bassquake (They were my guests at Musicalia once) now apart from being an awesome blog, they have a record label, that promises to bring the freshness that they have us used to on their posts.

For their debut release they bring A.J. Holmes and The Hackney Empire ‘Fraudian Slip’, produced by Radioclit this single sounds like a sunny afternoon with your best friends at your favourite place!

To celebrate this release, the guys at Ghetto Bassquake are giving the Erick Rincon rmx for free. Grab it here!

plus an exclusive mixtape from A.J. himself!